Visvarupa to the Devas in Balalila

The Skanda Puranam describes an interesting occasion when Skanda revealed his Visvarupa to the Devas. While describing the child sport of Skanda, the Puranam relates how he once rent asunder sportingly the seven great mountains, Kulachalas; how he damaged the seven great islands, Dvipas; how he mixed the seven seas; and many other such exploits. On seeing this upheaval of unusual aggression, the Devas were very much worried. They reported the matter to Indra.

Indra, who came under the sway of Maya, forgot who the child that wrought all this in reality was. He went and beat Skanda, who returned the compliment. A bitter fight ensued. Indra's arrows fell on the head and feet of Skanda in the form of flowers. Indra used Vajrayudha, but to no effect. Skanda's return arrows made all the Devas fall dead.

Devarshi Narada saw this calamity, became very upset and informed Devaguru Brihaspati immediately. Brihaspati rushed to Skanda and prayed intensely, "Obeisance to Subrahmanya, who is also Siva, engaged in protection of the world; to one, whose Maya made the Devas lose their perception and approach you with hatred instead of worship."

Skanda, who was pleased, told Devaguru to ask for a boon. Brihaspati said: "The Devas were punished by you for the grave error they committed, overcome by your Maya. Please forgive their ignorant actions and restore their lost limbs and life and well-being."

Skanda smiled and granted the prayer. All the Devas woke up as if from sleep. The compassionate Skanda removed their ignorance and granted them bhakti towards his lotus feet. He said, "O Devas, do not consider me a child like ignorant people! Now look at my form, akin to Paramesvara."

So saying, Skanda revealed his Visvarupa. But lo! Even the Devas' eyes, which do not blink nor sleep, were blinded by the brilliance of Skanda's form. The Devas prayed that they be granted divine vision to be able to see the radiant cosmic form. Skanda said that their normal eyes are not capable of looking at his Visvarupa and granted their prayer for special divine eyes.

The Devas now saw the mighty form. They observed crores of Brahmandas with their own Brahmas and Vishnus and other inhabitants, hanging from Skanda's hair-ends and felt that their own stature was nothing in comparison with Skanda's form. They chanted a prayer brimming with the import of Vedas and Vedanta.

"We worship Subrahmanya, that Supreme Brahman, from whom all the created worlds are born, by whom the worlds stand protected and in whom they enter and rest.

We worship the son of Uma, who is the ocean of Perfect Bliss, is without a parallel; a small part of whose Bliss is the happiness of the Devas like Brahma."

The Devas then said that they were afraid of the intense brilliance of the form, like ordinary eyes would be in the midday sun, and prayed to Skanda to resume his normal form with six faces and twelve arms, used to grant benevolently all kinds of wealth always. Skanda then resumed his form, handsome as a crore of Manmathas. He said that he would grant all the wishes of those who prayed to him chanting this great stotra and told the Devas to ask for boons. He then responded to their supplication stating that he would lead the army of the Devas and annihilate Surapadma and his predatory horde of asuras.

Skanda fought a six-day war with Surapadma and other asuras. On the second day, Surapadma lost all his weapons, chariot etc. and stood on the ground unarmed. As Rama told Ravana in a similar condition on the battle-field, Skanda spoke to Surapadma:

"Owing to compassion, I have not unleashed my Sakti (Vel) weapon on you".

Surapadma felt humiliated and returned to his palace. The war continued. On the sixth day, Surapadma returned to the battlefield; the battle was unimaginably fierce. Surapadma, being the emperor of 1008 Brahmandas, shifted to different worlds and fought pitched battles, assuming different forms including divinities, natural forces like fire, wind etc. Eventually, seeing the total the devastation of his mighty army and helped by the advice of his mother Maya, he brought a mountain called Sudhamandara from across the distant seas. On breathing the air from that mountain of herbs, all the dead asuras regained life. Surapadma's close lieutenants including Simhamukha, Bhanukopa and others got up as if from sleep and resumed fighting. It appeared as if the five days of war had gone to total waste. 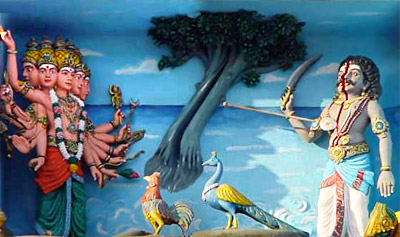 At this moment, when the Devas started fleeing in unabashed fear, Skanda deployed Pasupatastra and killed the enemy army in a jiffy. Surapadma was now alone on the battle-field. Again he assumed different forms and resumed fierce fighting. The divine weapons unleashed by Skanda destroyed all of those forms in no time. It was at that moment that something totally unexpected happened. Skanda said to Surapadma, "I have seen your various forms. Now you may see my form!"

Skanda then assumed the Visvarupa (universal cosmic form), which Skanda Purana describes as avangmanasagocharam: 'beyond the ken of speech and thought'. Huge mountains were in the middle of his feet; seas at toe-nails; stars and planets in toe-fingers. Nirruti and Varuna were seen in the ankles. In the calves were sages and the gem Chintamani. In the knees were Vidyas; in thighs, Indra and his son Jayantha. Yama and Kala were in the waist joint; Asuras in the waist; the Devas and Nagas in the sides; nectar in the generative organ. In the navel all worlds were being created. In the chest were sastras; gnana in yagnopavita. Brahmandas were seen hanging in hair-ends. In the hands were boons (ready for giving to devotees). Brahma and Vishnu were in the arms. Deva women were in the fingers. In the neck were seen words; in the mouth, Vedas; in the teeth, alphabet; in the tongue, Sivagamas; in the lips, seven crores of Mahamantras. In the nose was seen Vayu; in the eyes, Surya and Chandra; in the ears, directions. Pranava was in the forehead and Paramatma Siva with full form was in the head.

The assembled Devas were afraid to behold the Visvarupa and praised Skanda, who calmed them. Surapadma felt upon seeing the Visvarupa that he was indeed blessed. His thoughts ran thus:

"Skanda is not a child, as I ignorantly thought; he is none other than Paramesvara. He has fought a fierce war effortlessly, exterminated my army, took away Indra's chariot from me and destroyed the various forms of Maya I took. He has shown me His Visvarupa out of grace; this form is unparalleled, having on its body the Devas, Asuras, humans and crores of Brahmandas. Pride of wealth and suzerainty prevented me from listening to the sane words of my brother Simhamukha and son Bhanukopa. I have had the privilege of seeing His Visvarupa from head to foot. Still I am not satisfied; desire to keep seeing increases. Due to my tapas I could see this divine form. I experience bhakti welling in my heart; I feel like circumambulating and prostrating before Him and praising him. Oh, my right eye and hand throb; this is auspicious. What is the difficulty for Him in killing me? It is all sport. Now another thought crossed the mind of Surapadma: Ignorant people advised me to surrender to him. It is only by imprisoning the Devas and fighting Skanda that I could see His Visvarupa."

At this point Skanda took away Surapadma's divine perception and assumed his earlier form. Surapadma lost his new-found wisdom, clapped his hands in fury and told the Devas: "Unable to fight with me, this child took another form through Maya (illusion). I destroyed that illusory form in a second. There is none on earth to equal my capability. I will conquer him and devour all the Devas." Surapadma then assumed fierce forms, followed at the end by a massive mango tree. Skanda's Sakti (Vel) ayudha rent it into two, which became peacock and cock. They too launched a terrible attack on Skanda.

"Guha, the very form of Supreme Bliss, immediately cast a look of compassion on the peacock and cock. And lo! Shorn of pride, they attained to the Supreme Experience of Bliss."

The day this transformation took place is celebrated as Skanda Shashti.*

The play of thoughts in Surapadma's mind is interesting. It is illustrative of what commonly occurs in any human being. He is continuously tossed between divine and demonic surges of thoughts. Even after seeing directly the Visvarupa of Skanda, Surapadma did not decisively get over his arrogance and haughtiness, which repossessed him in no time. He failed to realise how small he is in the entire universe.

Lord Krishna, while describing the 'asuric wealth' in detail in the Gita says: The ignorant and deluded beings think, "This enemy has been killed; I shall kill others too. I am the lord and enjoyer; accomplished, strong, surrounded by pleasures, rich and born in noble family." These persons are ever attached to lust and pleasures. Krishna warns us to exercise utmost care in countering desire, anger and greed, which are all rooted in the false sense of 'I' and 'mine'.

Visvarupa has also been manifested by Krishna in Mahabharata including his fearful, all-devouring form in Bhagavad Gita, by Vishnu in Bhagavatam, and by Devi in Devi Bhagavatam. Visvarupa is a physical demonstration of the fact that the entire creation is pervaded in every speck by Bhagavan. Skanda points to this fact by showing his Visvarupa equally to Indra, king of the Devas and to Surapadma, king of the Asuras. Krishna in the same manner revealed his Visvarupa to Duryodhana as well as Arjuna.

The Upanishads declare that Bhagavan is the material as well as efficient cause of the entire universe. If asuras and adharma are also seen in the Visvarupa form, it proves that nothing in this created universe is outside Bhagavan. Bhagavan creates the universe like a spider out of his own body and enters it. That is why Krishna declares in the Gita:

"To one who sees me everywhere and everything in me,

I am never out of his sight, nor is he out of my vision."

It is not necessary for an aspirant to dream of direct vision of Visvarupa; it is enough if he perceives the glory of Bhagavan in his Vibhutis, the special impressive manifestations. He should gradually refine his mind to gain that universal vision, which enables him to realise God in everything.

Further, every speck in creation is purna, complete in itself with the glory of Bhagavan. Vinoba Bhave says eloquently in his Talks on the Gita, "The sweetness of the ocean of nectar is found in every drop of it. Not only the sweetness, but the nourishment is the same in the sea of nectar and in a drop of it. If we drink one drop of it, we gain the fullness of amrittattva, immortality."

"When the desire for enjoyment goes and the holy outlook of love is gained, then we shall see God alone in all objects." This attitude will take the devotee to that ripe state, where he will see the Visvarupa in his own heart, not outside of him with special divine eyes. He will then be in advaita bhava, where there is no 'other'. He becomes a jivan mukta, liberated while in his human body.