Towards Truth: An Australian Spiritual Journey

Chapter Nine of Towards Truth: An Australian Spiritual Journey, the autobiography of an Australian career diplomatic officer who, during a posting in Malaysia, became a Hindu pilgrim and participated in the Hindu festival of Thaipusam. In his own words, it traces his inability to find solace or meaning in the philosophies of the Western workd, describes his experiences in Malaysia, his adoptation of Saivite Hinduism, and the power of spiritual transformation.

In January 1978, in the company of my wife and several visiting friends, I attended the Hindu festival of Thaipusam.

While I have devoted a later chapter to this topic, the following is offered as a basic explanation. 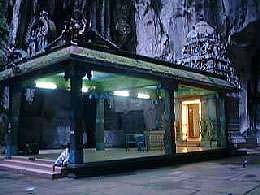 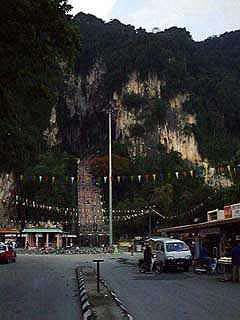 The main entrance to Batu Caves, where hundreds of thousands of Murugan devotees gather for Thai Pusam celebrations.

The major venue within Malaysia for Thaipusam is Batu Caves. In essence, Thaipusam celebrates the acquisition of the Sakti Vel (electric spear) by the Hindu deity Lord Muruga (also known as Skanda or Subramaniam). Lord Muruga is the son of God Siva and His 'wife' Parvati. He was created by God Siva solely to destroy the manifestations of absolute evil which had enslaved the world, and the Vel, which was the weapon used to fulfill this task, was presented to Him by Parvati. Lord Muruga's subsequent destruction of the evil force (Padmasura, also known as Surapadman) represents the Hindu belief that no absolute evil exists as a counterpart to a benevolent and loving God; thus Hindus have no equivalent of Satan.

Esoterically, the epic battle upon which Lord Muruga embarked with Padmasura is repeated as the struggle in which the mind engages to gain liberation from the bondages of ignorance; true enlightenment, which is gained only with the knowledge of God, is completed with the destruction of the ego. Without awareness of God, the mind remains subject to the tyranny of instinctive or intellectual passions. The Vel held by Lord Muruga is thus symbolic of spiritual power.

God may be perceived as possessing both "masculine" (Siva) and "feminine" (Sakti, known as Parvati) components. Without the "feminine" aspect, God is remote and unknowable; without the "masculine" aspect, Shakti has no existence. Thus the bestowing by Sakti of the electric spear (Vel), upon Lord Muruga, a deity created by the Absolute, indicates a manifest fusion of God's Absolute and Generative powers.

Saivite Hindus hold Lord Muruga to be the God of yogic powers and spiritual disciplines. He propels devotees to spiritual unfoldment. Religious celebrations are staged on a scale commensurate with the overwhelming spiritual significance of this revelation; each year up to 500,000 people gather at Batu Caves, and other Thaipusam destinations attract considerable crowds.

A feature of the festival in Kuala Lumpur is the carrying of 'kavadis' (literally 'burdens') by approximately 3,000 devotees. Some of these kavadis are simple decorated wooden arches, while others are elaborate affairs consisting of large platform like structures which may weigh anything up to 40 kilograms, and which are anchored to the body by means of a metal 'belt' which encircles the waist. Celebrants who take these more complex kavadis generally place miniature 'vellu' (vels or spears) through the tongue or cheeks, and attach hooks from the kavadi into the flesh of the upper torso.

By participating, devotees are attempting to achieve a deeper understand­ing of their relationship to God; they may take a vow to carry a kavadi because of illness of relatives, to atone for sins, or simply to accelerate their rate of spiritual unfoldment. At the time of their pilgrimage they must be in a state of ritual purity; that is for a prescribed period of time, generally 28-42 days, they must have abstained from eating meat or eggs, avoided alcohol, slept by themselves on a mat on a floor in a clean area, abjured sexual relations, eschewed smoking, and refrained from cutting their hair.

On Thaipusam day participants ritually bathe and pray after which they achieve a brief state of trance during which the kavadi and vellu are fitted. This process is both painless and bloodless. Once this is accomplished the devotee, accompanied by a protective circle of well wishers, dances to the foot of the caves, climbs the 272 steps which lead to the shrine in the cave, where his/her kavadi is removed, and final obeisance is made to Lord Muruga. The conditions of austerity under which the devotee is living end on the third day beyond Thaipusam. At the time of which I am writing, I knew little of the above.

My diary does not provide a complete record of the impression that Thaipusam made upon me. Upon my arrival at the foot of the stairs at about 5 a.m., I had viewed proceedings dispassionately.

However, shortly after sunrise, I felt strangely overcome. I found that the devotees taking kavadis seemed to radiate a sort of exhilaration; an electrically charged magnetism which affected me greatly. I began to feel intuitively that immersed within these celebrations was a Power that held the answer to my search, and that would settle the instability which had been a feature of my life. The dominance of the presence I experienced that morning nearly overwhelmed me, and had I not sat down I would have fainted.

At the time, I gained the unmistakable impression that I too would one day participate in the festival, and that I would take a kavadi (I mentioned these thoughts to my wife at the time.) Later I attempted to dismiss these feelings as a rush of emotionalism engendered by cultural disorientation and the unfamiliarity of the occasion.

However my interest had been deeply stimulated by what I had observed, and I now began to ask my Indian friends to provide some explanation of Thaipusam, and Hinduism generally. I later recognized that some of the information I sought must have seemed infuriatingly elementary, but my friends patiently provided comprehensive answers to every question. I asked. I now learned about fundamental philosophical concepts such as karma, dharma, and reincarnation; the roles of the major Hindu deities were delineated.

I attempted to disguise this process of exploration under the neutral cloak of detached academic inquiry. I told myself that the knowledge I derived from my questioning would provide a useful and detailed insight into another culture. At this point I wished to keep notions of formal religious observance at a respectable distance. Nevertheless, my determination to resist was perceptibly weakening, as noted by my diary entry for 23 April 1978: "...I am becoming increasingly attracted to the Hindu religion..."

On Sunday 30 April 1978 I had the third of the mystic experiences that collectively were to transform my spiritual outlook. My diary records this experience in full:

It should be noted at this point that my use of the term "reverie" was misguided; the term "trance" would have been more appropriate, though I still did not know what a trance state was. My spiritual confusion and overall ignorance did not allow me to draw conclusions from this experience, though it intensified the processes of religious enquiry.

In February 1979 I accepted the invitation of a Tamil friend to accompany him to the Thaipusam festival. He informed me that several of his relatives would be taking kavadis, and that I could observe their involvement. He suggested that in order to absorb more of the atmosphere of Thaipusam, I should take the train with him from Kuala Lumpur to Batu Caves.

This was impossibly crowded, and to my acute embarrassment (but to the general amusement of those in the carriage), I was hemmed into position beside a young child, whose terror at her enforced proximity to a bearded European translated into incessant shrieking, which continued for the entire journey. Once again, the Malaysian capacity for religious tolerance impressed me, particularly the deployment of mainly Muslim security forces and police to guarantee the peaceful conduct of a Hindu Festival.

I spoke at length to the devotees about to take the kavadi, and gained some comprehension of their profound commitment to their religious ideals, and the strength which had seen them through their preparations. I doubted whether I could exercise such fortitude or self-discipline, though when I was asked whether I would be shocked by the concept of taking a kavadi myself, I replied that although I could never see myself doing this, the idea did not upset me.

I watched while the trance state was attained, saw the fitting of vellu and kavadis, and ignoring the stares of Western tourists followed the group of devotees to the Cave. I felt some of the electrifying exhilaration of these participants, and wished that I could gather some insight into the depth of their ecstasy. While returning to the river near Batu Caves with my friends, I had a brief feeling of spiritual transformation, which is impossible to describe, but which temporarily conveyed some sense of religious awe, a yearning for knowledge. I felt almost betrayed when this feeling left me, but later foolishly rejected the power of my own senses by imagining that this experience was merely a sensation elicited by the excitement of the moment.

The following night while dining in Kuala Lumpur, Wendy and I were again confronted with our future. I quote from my diary of 11 February 1979: "...We emerged from the Restoran to witness a strangely moving sight; that of the chariot of Subramaniam returning to Petaling St. Temple. The chariot was illuminated, pulled by oxen and escorted by lines of devotees singing religious songs. How I am going to miss this wonderful country in less than two months time...

We went through a round of final farewells. I took leave of my Malaysian counterparts, who presented me with valued mementos. In the meantime events made it urgent that I return to Australia. My father underwent an aortic bypass operation, from which after a week of indecision, he made a marked recovery. Mother, at the age of 66, retired from work, and embarked upon a number of projects.

On 24 March, we were driven to Subang Airport. Unexpectedly, a large number of our Malaysian friends gathered to farewell us. My resolution, which had been faltering, threatened to break entirely, but I composed myself, and with a sense of numbness tendered my goodbyes to people who were numbered among my closest friends and confidants.

We had planned to spend a day in Singapore prior to our departure for Australia. On our final morning in Asia, I took Natalia, who was deeply upset, for a walk. As if by chance, we visited a Hindu temple, and I received a flickering precognition of the Power that would repeatedly draw me back to Malaysia.

Jaya had traveled to Singapore to see us off, and came to Singapore Airport. There the threatened deluge eventuated, and Wendy, Natalia, Jaya and I comprehensively broke down, while Carl Junior, then 18 months of age, chattered on, uncomprehending, in Tamil. The Singaporean Immigration officials tactfully pretended to ignore the weeping mass we had suddenly become, but other passengers and Airline officials congregated, anxiously asking us whether we had suffered a bereavement, offering condolences, and enquiring whether they could offer assistance. We were moved by their kindness, but our grief was too deep to be assuaged by the warmth of their gestures.

And so, disheveled and mortified by my uncontrollable public lachrymosity, aware that I was leaving behind most of my closest friends and a still unresolved religious mystery, and conscious that part of me would ineradicably remain Malaysian, I returned to Australia. 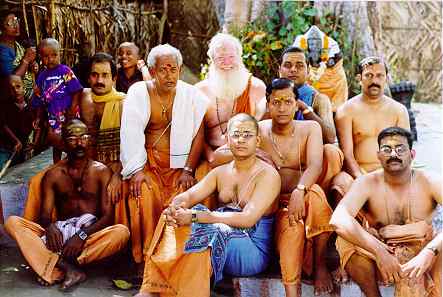 Carl Vadivella Belle, M.A.. is a former diplomat whose career in the Australian Foreign Service was terminated on account of his devotional activities in Malaysia and Australia.. He is the author of Towards Truth: An Australian Spiritual Journey (Sydney: Pacific Press, 1992) and a practicing journalist and farmer outside Adelaide, Australia. He is also the editor of Bhakti! newsletter published in Canberra, Australia.